In October 2022, Nigeria was hit by some of the worst floods in a decade, leaving a trail of devastation and destruction across 33 of the country’s 36 states. The floods displaced 2.5 million people from their homes, leaving them in need of humanitarian assistance.

Bayelsa State in southern Nigeria was the hardest hit of all, where 1.3 million people were affected, and 96 lost their lives, according to the Bayelsa State Emergency Management Agency.

The rising waters destroyed farmlands and crops, health structures, schools, and other buildings — as well as many people’s livelihoods.

The risk of cholera and other water-borne diseases significantly increased, as people were forced to use flood water for drinking and washing. Children and adolescents were particularly vulnerable to water-borne diseases, in addition to the psychological effects of the disaster. Older adults, women-headed households, and those with terminal illnesses were also left in a precarious situation.

Many of the people displaced by the floods, like Petty Jumbo, found themselves without the means to feed their families overnight. The mother of three was eight months pregnant when the rains hit Okolobiri community, where she lived with her husband and children.

They woke during the night to find their home flooded and had to escape with their children and the few possessions they could carry. Before the floods, they ran two businesses and were doing well for themselves. But after losing their home and belongings, they took refuge in a camp for internally-displaced people and became dependent on the government for support.

Chipper Cash is committed to supporting and empowering people throughout Africa — especially those most in need. So we partnered with ActionAid Nigeria and their local partner MACJIM Foundation to provide much-needed food supplies and financial support to 70 flood-affected households in Bayelsa State.

With Chipper’s support, MACJIM and ActionAid identified and selected the recipient families based on their level of vulnerability, prioritizing:

Petty and her family are among the beneficiaries of the Chipper Cash-ActionAid-MACJIM collaboration. “I am very sad about the situation, but I am also grateful that organizations like ActionAid and Chipper Cash have chosen to support us [during] this period. My family and I are grateful,’’ she said.

Many of the beneficiaries welcomed the additional support, which arrived just in time to see them through the Christmas period. Donesa Amobogha is a mother of two whose husband died while rescuing others from the flood waters. She was selected as a beneficiary of the project.

“The food and money [donated] by ActionAid will support our family through the next two weeks. I am happy this is coming at Christmas time and will make me worry less this period,” she said.

Savannah Brandy, an older adult from the Ogboloma community who also received support from ActionAid, said, “Despite all that happened to my family […] the losses, the destruction, the displacement — Christmas came correct this year. I just bought a bathing soap, Vaseline and groundnut to drink garri now. I will cook rice later tonight. I haven’t used soap to have my bath in a long time […] Today is just a good day.’’

Another recipient, Rachael Oviri, who was already struggling to make ends meet before the floods, said: “When I found out I was selected to benefit from this intervention, I was very happy. My feeding for the next six weeks or more seems guaranteed with this package.”

In a statement, Marketing Campaign Manager at Chipper Cash Nigeria, Goldie Iyamu, said: “As a brand that is driven by our customers’ lives and committed to the African continent, we care deeply about the communities affected by the floods. Our goal was to help as many people as possible get back on their feet after this tragedy. By partnering with ActionAid, we were able to provide immediate relief to some of those who felt the impact hardest.” 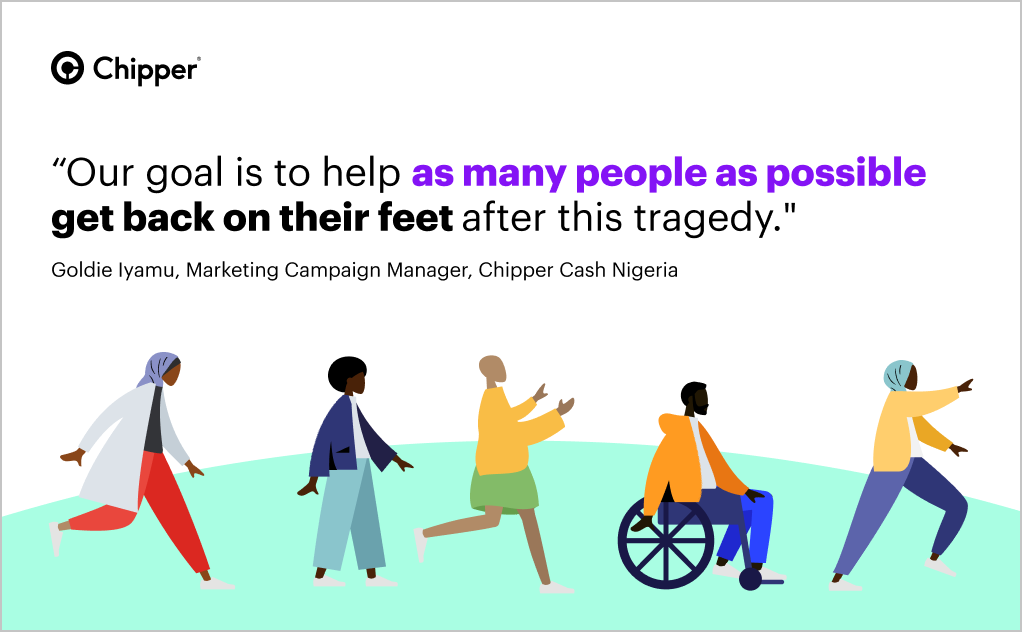 According to UNICEF, Nigeria is considered at “extremely high risk” from the effects of climate change and ranks second out of 163 countries on their Children’s Climate Risk Index. It is also Africa’s most populous country, with a total of 206 million people — of which 43% are children under the age of 15.

This large, young population is likely to be exposed to more shocks in the coming years as extreme climate events become more common. For this reason, Chipper Cash is committed to supporting climate-affected people in Nigeria and throughout Africa and will continue to work with trusted partners like ActionAid and MACJIM to deliver assistance to those who need it most.

Learn more about Chipper’s corporate social responsibility work in this blog post on our project “Chipping Away Illiteracy through Football.”

More amazing articles for you

Want updates straight in your inbox?

Enter your email to get the latest news and announcements from Chipper Cash.
We use cookies to improve your experience and for marketing. Learn more in ourcookie policy.